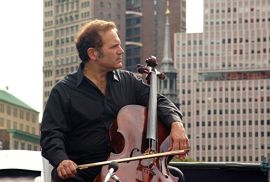 Frederick Zlotkin, winner of the International Music Competition at Geneva, is clearly recognized as one of today’s outstanding musical artists.  Among the highlights of his wide musical career are solo engagements with l’Orchestre de la Suisse Romande, the Minnesota Orchestra, the New York City Ballet, National Symphony Orchestra and the St. Louis Symphony, chamber music appearances as member of the Lyric Piano Quartet, guest artist with The Chamber Music Society of Lincoln Center, the Aspen Music Festival, Chicago’s Ravinia Festival and the Minnesota Sommerfest, and his post, for over 30 years, as Solo Cellist for the New York City Ballet at Lincoln Center.  In the metropolitan area he has also served as Principal Cellist for numerous orchestras and performs regularly with the New York Philharmonic.  Zlotkin has recorded for hundreds of motion pictures and with numerous contemporary artists such as Frank Sinatra, Madonna, Aretha Franklin, Neil Young, and many others.

Zlotkin, who earned his doctor’s degree from The Juilliard School, studied with Gregor Piatigorsky, Leonard Rose, and Channing Robbins.  He is the only present‑day cellist who performs Bach’s Six Suites for Solo Cello with full ornamentation, and his recording of that work has been hailed as “one of the most gratifying Bach performances on records.”  A member on the faculties of Manhattan School of Music, Queens College, Hoff-Barthelson Music School and the Brooklyn College of Music, he has also served as Adjunct Professor at SUNY-Purchase and as Music Director of the Montauk Chamber Music Society.

Zlotkin’s musical lineage reaches at least as far back as his great uncle, cellist-conductor Modest Altschuler.  His father, Felix Slatkin, was a violinist and conductor and founded the Hollywood String Quartet, of which Zlotkin’s mother, Eleanor Aller, was the cellist.  His brother, the distinguished conductor Leonard Slatkin, has been Music Director of the St. Louis Symphony, National Symphony, and became Music Director of the Detroit Symphony in 2008.

Zlotkin has performed at Ground Zero for the past 10 years during its annual reading of the names of the deceased.  In 2002 he did a special recording of Korngold’s Cello Concerto with his brother and the BBC Symphony Orchestra. He also performed that work with the National Symphony Orchestra in Washington, D.C.

This summer, Zlotkin will perform David Chesky’s Concerto for Violin, Cello and Orchestra at the Endless Mountain Music Festival in Pennsylvania. In the Spring of 2013, he will be one of the participants with the Lincoln Center Chamber Music Society in a concert entitled,  “Everyone Loves the Cello.”