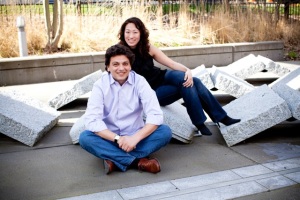 Grey Fulmer, bassist, joined the New York City Ballet Orchestra in the fall of 2003. He graduated from the Juilliard School, where he performed Serge Koussevitzky’s Double Bass Concerto with the Juilliard Symphony. In 2001, he was awarded a fellowship to the Aspen Music Festival and School, where he was runner-up in the Lower Strings Concerto Competition. He performs with The Knights Chamber Orchestra based in New York. He began his double bass studies in his hometown of Seattle with Barry Lieberman, and continued with Eugene Levinson at Juilliard.  Grey is recently married to New York City Ballet Violinist, Nelly Kim.