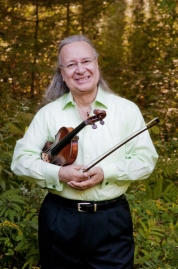 Arturo Delmoni, Concertmaster of the New York City Ballet, is one of the most celebrated artists of his generation.  His remarkably distinctive playing embodies the romantic warmth that was the special province of the great virtuosi of the golden age of violin playing.  Yo-Yo Ma describes Delmoni as “an enormously gifted musician and an impeccable violinist.  His playing style is unique, and his gorgeous sound is reminiscent of that of great violinists from a bygone era.”  Glenn Dicterow, Concertmaster of the NY Philharmonic, says “Delmoni’s playing always goes right to the heart and his charisma is irresistible.”  Delmoni’s stylish, elegant interpretations of classical masterpieces have earned him critical acclaim in the United States and abroad.

This season marks the 50th anniversary of his Carnegie Hall debut where, at the age of 14, he performed the Tchaikovsky Violin Concerto with the Little Orchestra Society under the direction of Thomas Scherman.  He has appeared with major orchestras across the country, including those of Dallas, St. Louis, Boston, Los Angeles, and with the NYCB Orchestra in New York.  He has appeared as a recitalist throughout the US and Europe, as well as Japan and Hong Kong.  As a chamber musician, Delmoni has performed with illustrious colleagues including Mr. Ma, Pinchas Zukerman, Emanuel Ax, Elmar Oliveira, Nathaniel Rosen, Jon Kimura Parker, Jeffrey Kahane, and Dudley Moore.  He regularly appears at chamber music festivals throughout the country during the summer months.

Delmoni has recorded approximately twenty CDs.  Alan Heatherington of The American Record Guide wrote “The growing discography of Arturo Delmoni testifies to a musician who must possess an artistic soul of exceptional beauty.  Each new issue reveals additional aspects of a winsome musical personality and verifies an impression of great warmth and geniality.”