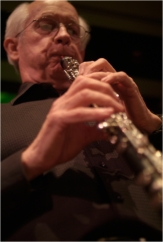 James Byars has been a member of the New York City Ballet Orchestra since the late 1960s, playing oboe and English horn. Conductors with whom he has worked include Robert Irving, Leonard Bernstein, James Levine, Karl Böhm, Valery Gergiev, Aaron Copland, Marin Alsop, John Adams, and Paul Hindemith. He worked for many years as a tenured middle school teacher of orchestral music in the Bronx. He received Undergraduate and Masters degrees from The Juilliard School of Music and a Masters in Education from Columbia University.  In addition to playing classical music, James has recorded three CDs with jazz groups in the last five years, and performed at the Village Vanguard, Iridium Jazz Club, Smalls and The Players Theatre.